The 2010 Schott 50 State Report on Black Males in Public Education reveals that the overall 2007/8 graduation rate for Black males in the U.S. was only 47 percent. New York's graduation rate for its Regents diploma is only 25 percent for Black male students. New York City, the district with the nation's highest enrollment of Black students, only graduates 28 percent of its Black male students with Regents diplomas on time.

It's certainly not just New York: 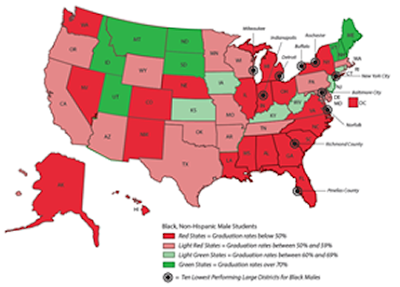 If you're a parent, the solution may be to move your child to Maine, Montana, or New Hampshire, where Black boys graduate more than their state peers, or the national average.

Or, you can drive for change in your district. Newark--long suffering Newark, NJ, in the shadow of New York City and a mecca for ESL, 73% non-white, and 30% below poverty--has closed its graduation race gap.