Class Dojo
How far we've come since the start of this blog! Education Nation, for a second year, is focusing the country on the issue. Among the solutions, tech was highlighted. Check out this cool app to help teachers reward and document behavior real time during class. 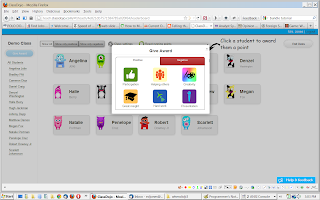 You may recall that your humble blogger comes from the aerospace segment.

The column is an interesting perspective, coming from a man of this broadly experienced.
Posted by Ed at 7:05 AM 0 comments

Visit http://cloudcaptive.com for more information or sign up at userinfuser.com
Posted by Ed at 7:22 AM 0 comments

Email ThisBlogThis!Share to TwitterShare to FacebookShare to Pinterest
Labels: Open Sources
"The School With the Best Technology Rules' 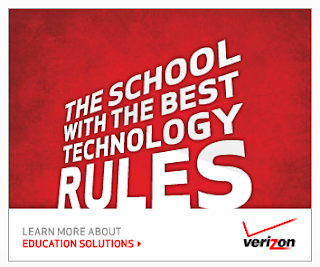 Kudos to Verizon for the funny play on it's previous marketing sthick. The company is running an ad which merely says "The School With the Best Technology Rules", linked to this page.

Is there truth to the phrase? Depends on how you define "best".

A lengthy piece in the NYTimes is making the rounds, saying NYET. Tom VanderArk takes this on, and refers us to other noteworthy responders in Richtel's Rear View Mirror Missed the Mark.

The fact is, we're not there yet. In a few lucky schools, yes. But can the average district walk in and be sure they're wisely investing in a path to increased core learning? No.

Public vs Private Aims in Education
Mike Petrelli this week considers the strange conflict between the public perception of American schools and parents' views of their own child's school.

As Mike ably points out, there's nothing new about such dichotomies. He mentions Congress, where people dis' the body as a whole, yet love their own guy. Polled views on the economy also often show the same public vs personal split. People echo the media--nothing new there.

In the battle for schools, Mike is essentially siding with parents, and not the Tiger Mom variety. Chill a little. Who cares if the Finns have nothing better to do than practice PISA tests? And in that, I'd agree.

Yet tests aren't the only measure. And the work ethic of nations and their people's do change.

Rome not only wasn't built in a day, it wasn't destroyed in a day either. The Roman government and people became obsessed with entertaining themselves. They lost interest in building and maintaining roads, forts, armies, and engineering. Circuses and imperial intrigue captured the attention of Senator and Serfs.

Is the American attitude toward education drifting? Our attitude toward work period? I know some dairy farmers and contractors whose hiring experiences tell them that.And Lord knows I've engaged enough teachers who insist that "memorizing facts" is no type of education, that education should consist of following all your passions.

And the economy seems for now to reward these views.

Indeed, would you complain at the education of your child at a four year college, complete with all the modern amenities? Especially if their degree in "Communications" landed them a $50K job as assistant producer with The Real Housewives of New Jersey?

And if said child were able to gain entrance to such luxury, would you complain at the K-12 institute which gets him there? Hardly.

Yet nations do lose their greatness. Their people do drift from their values. I'm not suggesting this is true of the majority. I'm suggesting luxury often breeds complacence .

Consider the engineering classes of our great universities. When I looked around the room at 10:00 at night in the engineering library during my time at CMU, the other faces looked like Pittsburgh. (Well, suburban Pittsburgh).

Today, you'll be lucky to find a midwestern face haunting the engineering libraries of any of the nearby schools. And you certainly won't find the faces of African Americans who have so much to gain from incessant study therein. I know several local kids who at least tried engineering/physics. But they didn't have the grit to stick it out.

Two weeks ago the US ended its manned flights into space, depending instead on the Russians to supply our people in our International Space Station. Last week, the Russians suspended manned spaceflight following the loss of a rocket.

Not only can't we supply and re-staff our space station, now we may have to bolt up the door, because we can't even hitch a ride to get there.

Meanwhile, do you remember the great Captains Crisis? Where we can't find enough educated people to lead and organize our brave troops? Were you told of it?

Other splits tell us more about the perceoption of education. Whenever I tell people I work to bring history to students, most average people say, "I never liked history in school." Despite this, do you know the favorite vacation destination for families? (Well, its's the beach, of course.) Historical sites come in a strong second.

The number two vacation destination of American families is Historical sites. Despite people's reported disdain for learning history in school, they spend their precious vacation time at historical sites. That tells us much.
Posted by Ed at 2:33 PM 0 comments

Learning History from the Family Truckster (and Stay-cation Sucks Again).
Summer usually finds this blog filled with reports on some of our true national treasures, our national parks and historic sites, the many fine historic outdoor dramas, and some exhortations to get out there!

This summer we let you down, not even getting the exhortations part right.

In fact, what with trying to do three hard and time-consuming things, all with no stored up treasure and a deeply fallen business income, the past year and more has just sucked in the travel department.

But before summer fades completely, at least a little hearkening back to fatter years:
OK, that's a few. Click the "Trailside" category for more.

It's a good enough reminder that the best education doesn't always come in a classroom, from a salaried teacher, or a textbook tome.

And yet, I actually was conversing with the HS vice-principal last eve, and they think the school can't afford a trip to Washington this year.