Eight years have brought dramatic change in the Middle East, with more dramatic times immediately ahead. Go back merely to the 2011 State of the Union--sixty days ago. Japan, Egypt, Libya, Bahrain--none were on the agenda.

What of interactive education?

I wrote that first post in a coffeeshop in Ann Arbor--a short drive to the nation's worst school districts, with dropout rates for young men at 70%. While that hasn't changed, the young men have.

This week's Census release reveals that Detroit's population has receded to below where it was when Henry Ford first put out a notice for workers. One fourth of Detroit's people left in the past decade.

Governors clashing with public employees were'nt in the state of the Union, either.

NCLB came in as a result of teachers unions refusing to budge on any sorts of reforms, be they more flexible contracts, charters, vouchers, merit pay, technology, you name it. The educrats stood athwart history and said "Go Back".

Today, 50,000 young Ohioans are receiving an education they wouldn't have gotten, educations the teachers union didn't want them to have.

We're still working here to open up education. To take it away from the textbook conglomerate/educracy alliances. It's been rough. There's been no cash backing; things went far too slow.

We're getting closer to an architecture, and a demo project to prove it.
Posted by Ed at 6:27 AM 0 comments

Anatomy of A Learning App
The past year we've spent a good bit of time over at EdReformer exploring the economics of transitioning to Blended Learning. This slide and some commentary to follow aim to refine how we see the production side. 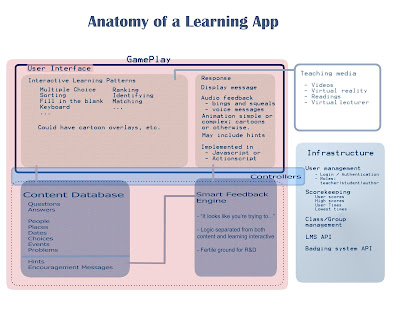 Click to view the entire chart. If you need a editable copy, let me know.
Posted by Ed at 10:43 AM 0 comments