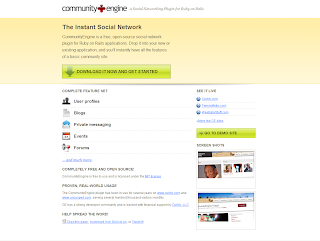 sketchpad : compose
Want animation, but worry about the drawbacks of Adobe Flash®? IE lack of support on some operating systems, cost of the development environment? Then maybe processing.js is for you!

Processing the language is actually a Java library. Processing.js is the Javascript port, which will run natively in a browser, without any plugin.

Want to try it out? Sketchpad is for you. Just modify the code in the left window, press CTL-R, and the resulting animation runs to the right. Easy as custard pie.

Want to see what others have done? The site has many game examples, but here's one with a knowledge web--maybe the future replacement of Wikpedia, who knows? Ask Ken--I asked about Baron "von Steuben", then "quark".
Posted by Ed at 11:17 AM 0 comments

K-12 Spending Per Student in the OECD | Mercatus Interactive Map - 2010 Census
The 2010 Census data is partly out; the Congressional Apportionment data has been delivered to the President. Here in Ohio, we'll be losing 2 seats of 18. (This is unsettling if you live in the 18th district, as we do!) Overall, the "rust belt"--though maybe not as rusty as it was--will be losing nine seats. 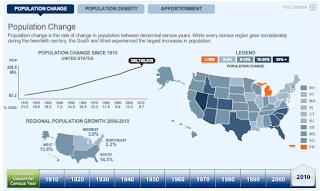 This interactive map shows the population gains/losses in the various states, over the course of the century.

Note that the map is still Adobe Flash. Nothing wrong with AS2/AS3, but...a static animation in an uber data-rich site seems a bit 1990's-ish?
Posted by Ed at 9:56 AM 0 comments

Finnish Schools are Compete Failures
Secretary Duncan, speaking just now, urges us to emulate Finland. There, only the top 10% of college grads need apply to be a teacher, and they'll face stiff competition at that.

How did Finnish Education become such a failure? Where did they go so wrong? In this nation, the top 10% of grads are not going on to cure cancer, not going forward to provide security and sustenance for the most needful in the world, not aiming for Mars or deep sea discovery, not making the world flat with new Internet apps and networks, not financing and building the world's supply chains, grocery stores, medical networks; not reaching into the past to uncover our shared legacy, not working to engineering intelligent highways, electrical grids, a cleaner, greener, more sustainable planet.

Finnish teachers are so bad that the height they teach their pupils to aspire to is returning to whence they came, spending all but four years of their life in the K-12 school building.*

Don't beat me. I'm not dissing teachers here. Nor Finland. None of this is to say that first rate American grads who have a passion to teach should not do so. Our schools need you. Especially if you are smart enough to go around the entrenched systems by which adults slow down the learning of youth.

Yet grades are not the only measure of a student, an education, or of a nation. And there's another thing. Who really wants a nation where only the best test-takers teach our kids?

We want such teachers for three reasons. One, because they will be more sensitive to their struggling pupils. Two, because their own learning, and the learning they pass on, will be richer, deeper, more empowering. Three because they will confront their 'best' students and tell them to reach farther, higher, harder than they think they are capable.


*About 20% of Finns get Bachelor level education;  teachers make up about 4.3% of the labor force. You can see that taking the top 10% of college grads for teaching positions doesn't leave much top talent for any other professions.
Posted by Ed at 12:41 PM 6 comments

From our perspective, there's a lot buried in that "know enough about their world"--the whole of the education battles, in fact.

Years back, I peeked samples from the Ohio achievement tests. Several of the questions required the student to identify different Native American tribe's telephone--oops, Totem--poles. Match the pole with the Miami, Wyandot, or Seneca tribes.

Now, I have no problem at all with using these as a one-period lesson in how non-western cultures of the time thought and communicated. It's a graphic lesson, a nice break for kids who struggle with print. It probably gives a hint of how the tribes differed, and one could look into why.

Yet how under-educated were the morons who decided this was testable required knowledge for every student in the state? That of the small time allotted to history studies in K-12, the most important, the most accountable knowledge would be the design of totem poles in a society that really was on the fringe of the march toward civilization?

When we make demands, then, we should demand that the 500 words a day of writing usually have some greater content objective. Something that truly helps understand the world of today. A friend recently had a substantial college writing assignment to write her own obituary, "how others see me", and other death-and-narcissism-related items. Bah.

Dropout Rates Dropping, but Don't Celebrate Yet
This is one take on the America's Promise (Colin Powell) report.